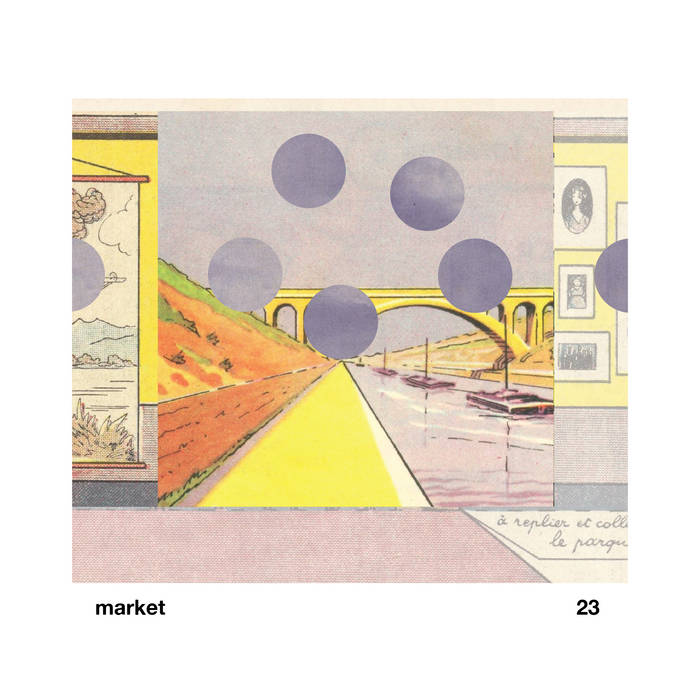 if you want to know more:

"23" was mostly written when i was that age, tinkered with at many other ages since, and recorded with the first market band in 2016 along with 8 songs which comprise market's forthcoming album, "yuy"

it has been sliced off of those sessions and works instead as an amuse-bouche for the album to come, soon

"23" was written when i was worrying about different things than I am now...things getting harder and more complicated as we age, feeling like we're getting worse at daily life just as it starts to feel obvious that we should have figured it out by now

and in this case, walking past a cemetery of headstones with friends' last names, probably unrelated, wondering if there's any relevance there. still feeling death is a non-issue compared to the week i've had, but mostly just cause i avoid thinking about it

"23" in its hand-slapping-on-thigh-while-sitting-on-porch-of-college-house form starts off market's first album, "Not Good At Spending Time Alone a.k.a. Cleanliness". that voice memo is from when i was 22, idly humming into my phone, something to return to later. the words originated from a time when i scared my friend by turning out the lights in a room i knew they were vaguely afraid of, enjoying their screams. that was when i was 19 but i guess it stuck with me

the market band at that time was steve on drums and sally on synths. we recorded the basic with adam in a house in western mass with an interface we returned to guitar center the next week

this song was cobbled together from words and sounds spanning years, threatening irrelevance now. and sure i sliced it off of the album, but it's funny to think that despite what i wrote above i'm still concerning myself with vaguely the same things, i'm still making music with the same people, i still go about it all much the same way. i wrote a lot of this song while going on a long walk around the reservoir, forcing myself to spend some time alone even though i was deeply bad at that then, and i still am now

thanks to everyone below
and all of the other supports, love you

Cows at the Edge of the Earth New York, New York

• a shared bandcamp / secret public web bunker from a bunch of friends who make music, sometimes together

• not a label, just a bandcamp [and secret public web bunker]

Cows at the Edge of the Earth recommends:

Bandcamp Daily  your guide to the world of Bandcamp